It was 1984. Apple had just introduced the Macintosh computer to the world. 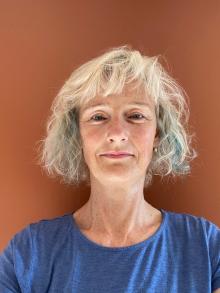 In Vancouver, an energetic graduate was enthusiastic about her own accomplishment. Moyra Ditchfield had just landed her first job at the University of British Columbia campus, helping a consortium who was developing the first email system for institutions.

A mere year later she took on her first role in the Department of Computer Science (CS) as Mac Lab Manager. “We were working with 400K disks. Everything was done in person, of course. Nothing was automated.” In addition to using the lab for CS courses, Moyra taught numerous UBC Continuing Education courses using the Macs. They were the first ‘WYSIWYG’ (What You See Is What You Get) computers.

As Moyra watched the UBC Computer Science department grow from 30 faculty and staff to over 100 today, she grew right alongside the ever-expanding department and its technology and infrastructure needs. Moyra went from Lab Manager to Undergraduate Facilities Manager to Director of Facilities and IT Manager, plus was seconded for a newly created Director of IT position by the Faculty of Science, working there 40 per cent of the time on top of her other duties.

"The tech staff in comp sci are brilliant people. If you find the right people and just let them do their job, there’s no need to micromanage."

As of her retirement at the end of May this year, Moyra was overseeing 17 staff and had put in many hours on various UBC committees including the Architecture Review Board, Email Retention Advisory Group, Privacy and Security Standards, and IT Directors Committee. She was also Chair of the Faculty of Science IT Managers Committee.

As the department expanded over the years, Moyra was instrumental in the continual streamlining and implementation of technology delivery, both in the department and beyond. She kept hardware and software current, and continually improved the building infrastructure and systems/networking.

When a department grows, so does the need for space and function. When a building overhaul and new building were approved for CS, the department quickly realized they needed someone to oversee the implementation. As Director of Facilities, Moyra was key in spearheading this substantial project that would require years and many millions to complete. The end result was a new lecture and classroom facility (Dempster Pavilion) and an extension to the existing departmental building, consisting of new research labs, computer labs, a food outlet, learning centre lounge and study spaces. Moyra had to work with countless groups, people and tradespeople to plan, renovate and build the infrastructure, extending even to the minutiae of choosing carpets, furniture and equipment.

She also represented the department in numerous functions like Scientists in School, Shad Canada, career fairs, and EUReKA! Science Retreats for teachers. Moyra developed an Emergency Preparedness Plan and provided support to others in outreach and education.

From 1987-91, Moyra taught an undergraduate course each term as a Sessional Instructor, during which she recognized some shortcomings in the undergrad curriculum. As a result of that teaching experience, in 1991 she proposed, designed and taught an introductory first-year course.

One would think Moyra had no time to spare for other activities. But somehow she managed to also volunteer at an elementary school as a technology facilitator. She brought in donated computers from UBC Computer Science, set them up, provided support and taught everything from Kindergarten to grade 7 (1995-2007). The school was so thrilled with their free computers, they named the lab after her: ‘Ditchfield Lab’.

She also supported the high school marching band and coached volleyball from 2007-2017. At home, Moyra was also busy raising her daughters.

An innovator. A doer.

As a creative person with people skills, Moyra’s ability to think outside the box has always enabled her to come up with real working solutions over her career that challenged the status quo and advanced the department. “I have always tried to upgrade the department beyond a utilitarian function,” she said, adding she never takes shortcuts. “I’ve always believed anything we do needs to be done with great care.”

Anthony Winstanley, a senior staff member on Moyra’s team, said, “Moyra provided leadership one could thrive under. She was confident in direction but also allowed the work of implementation to be carried out in ways that satisfied me. I appreciated the pressure to move ahead alongside the freedom to do something well.”

For her leadership efforts, Moyra won the UBC President’s Staff Award in 2013, among other awards throughout the years.

It’s all about the people

Moyra credits her staff for the team’s success. “The tech staff in comp sci are brilliant people. If you find the right people and just let them do their job, there’s no need to micromanage,” she said. Moyra is a believer in idea generation and two-way exchanges.

“It’s not about me pushing a proposal to staff – it’s about generating and sharing ideas. Listening more and talking less. When you're managing in a global sense, you can accomplish a lot more. It’s about allowing everyone to have a voice. As a result, creative solutions are developed and everyone contributes to the end goal.”

Her tactics must have been effective, because turnover on her team has been extremely low. “Most of the senior technical staff have been there a long time,” she said.

Letting go can be hard

Moyra’s retirement in late May after 37 years in the UBC Computer Science department, came with mixed feelings for Moyra.

“I struggled with it a lot at first,” Moyra explained. “I’m sad to leave because it’s hard to let go after so many years. It's like a child or a grandchild, such a constant in your life.”

But as she starts to talk about her ‘new life,’ the smile is suddenly back. “We moved to Gibsons and our house is right across the street from the ocean,” she said. “I walk along the beach every morning and every night.”

It’s not like Moyra is really very far from what she did during her employment with CS. She explains that the house is a fixer upper, so renovations are in full swing. It seems her vast experience and skillset in transforming spaces and coordinating the work required to do so, is still being utilized.

Moyra is also getting into the slower paced island life, has joined the Gibson’s Outrigger Club, and plans to make decorative concrete masks.

We hope retirement treats you well, Moyra. The department is forever in your debt.