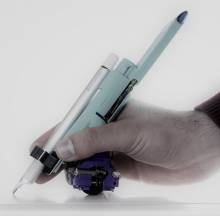 An elusive and audacious vision in haptics is the rendering of forces “in the large” – to feel sensations in large gestures, anywhere and anytime. The reality is that delivering force feedback in informal settings and diverse environments suffers from linked constraints. Producing force requires physical grounding, which limits workspace size; meanwhile, expansion impacts affordability and application versatility.

We present a grounded, planar force feedback device (the Magic Pen) via applications in collaborative task coordination and learning. The pen’s ballpoint drive achieves force-feedback grounding through rolling frictional contact on an arbitrary 2D surface. Its current tether provides communications and power, to be replaced in the near future with wireless and battery respectively. The ballpoint drive can render virtual features such as constraints and active guidance with no restriction on 2D workspace size or location. Together, these features give Magic Pens unique capabilities: multiple users can use them flexibly in either co-located or remote collaboration, e.g., reaching in and around one another to access the same point; and (untethered) they will be fully nomadic force feedback devices.