ERDÖS NUMBER
2 (the same as my Knuth number). I do not have a Bacon number, so my Erdös-Bacon number is not defined. Contact me with a cash offer to co-author a paper with you if you desire an Erdös number of 3. 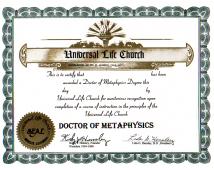 Official diploma attesting to my first doctoral degree, from the Universal Life Church

Kellogg S. Booth is Professor Emeritus of Computer Science at The University of British Columbia and a former Adjunct Faculty Member at the Centre for Digital Media. He is the former Director (1990-2002) of MAGIC, the Media and Graphics Interdisciplinary Centre at the University of British Columbia, and the former Scientific Director (2009-2015) of GRAND, the Graphics, Animation and New Media NCE, a former Canada-wide network of centres of excellence in digital media. He served as a Board Member and Secretary for the Computer Science Canada / Informatique Canada from 2017-2019. He has worked in the fields of computer graphics and human-computer interaction since 1968. Prior to UBC, he was a faculty member in the Department of Computer Science at the University of Waterloo (1977-1990), and before that a staff member at Lawrence Livermore National Laboratory (1968-1976). Research interests include human-computer interaction, user interface design, collaboration technology, visualization, computer graphics, and analysis of algorithms. He has been involved in a number of interdisciplinary research projects at UBC and elsewhere over the past five decades.

I am retired, so I do not have regular undergraduate or graduate teaching duties. Thirty years ago my thoughts on being a university professor teaching computer graphics were included in the ACM SIGGRAPH Career Handbook (pages 58-60).


Almost all of my recent research has been in the field of Human-Computer Interaction (HCI) including the following:

A list of previous dissertation/thesis topics that I have supervised in the past will give a snapshot of the range of my interests. I am not currently starting any new reseaerch initiatives or projects. My research is limited to finishing existing projects for which I have funding. (I am retired!)

Selected research initiatives in which I have been involved include the following2:


These are some links2 that I have found interesting or fun, but some (such as the first three) have serious content.

1 Comedian Steve Martin said that he once read that earning your second million dollars was a lot easier than earning your first million dollars, so he decided he would earn his second million first and then maybe not bother with the first million if it was going to be harder. I figured that probably applied to doctorates as well, so I got my first doctorate in Metaphysics from the Universal Life Church by sending them $20. It didn't make my second doctorate any easier.

2 Links go stale over time, so there is no guarantee that all of the links one this page still work. If you see any that are broken, please let me know and I will try to fix them.

3 Papers submitted to conferences or journals usually are sent to multiple experts in the field, each of whom writes an anonymous review. Often the reviewers are referred to by the editor as R1, R2, R3, etc. It often seems that the best reviews come first and then the more negative reviews follow. This video is a parody of many authors' experiences of getting positive reviews from R1 and R2 but then seeing a very negative review from R3.

Why the Pepsi logos on this web page, you ask? Good question!

Source file: index.shtml
Last modified: Tuesday, 05-Apr-2022 17:49:47 PDT
More information: ksbooth@cs.ubc.ca
Disclaimer: No animals were abused or mistreated during the production of this Web page. May contain traces of peanuts. Your mileage will vary. Taxes and shipping not included. Void where prohibited by law. Passports, driver's licenses, and birth certificates not accepted for voting; gun owner permits OK.
Apology: My disclaimer pales in comparison to Doug Dyment's disclaimer.