Vincent Lévesque is an Assistant Professor in the software and IT engineering department at École de technologie supérieure (Montréal, Canada) and the director of the Haptic User Experience (HUX) research group. He is also an Associate Editor for the IEEE Transactions on Haptics (ToH) and the IEEE Robotics and Automation Letters (RA-L). He was a research scientist with Immersion Corp. (Montréal, Canada) from 2011 to 2016. He was a Postdoctoral Fellow in the Computer Science Department at the University of British Columbia (Vancouver, Canada) from 2009 to 2011. He received a B.Eng. in Computer Engineering (2000), and a M.Eng. (2003) and PhD (2009) in Electrical Engineering from McGill University (Montréal, Canada). His research interests are at the intersection of haptic technologies and human-computer interaction, and include mobile and wearable haptics, tactile displays, and surface haptics. He is the recipient of several awards including Best Reviewer Awards at the 2016 ACM ICMI and the 2010 Haptics Symposium, Best Paper Awards at the 2012 Haptics Symposium and the 2011 ACM CHI Conference for his work on touch interaction with programmable friction, the Best Demonstration Award at the 2008 Haptics Symposium for his work on dynamic tactile graphics, and a Best Paper Award at the 2007 IEEE World Haptics Conference for his work on refreshable Braille.

He recently received the TCH Early Career Award at the IEEE World Haptics Conference 2019. Read more about it here. 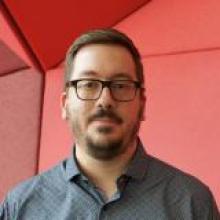